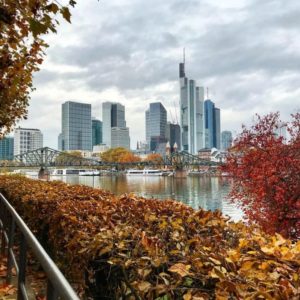 Frankfurt, the city where everyone passes, but only a few make a stop. After weeks of absence, I’m here again, back from many business trips, as for example the last in Frankfurt. The fifth German city by population (over 5 and a half million) after the capital Berlin and the cities of Hamburg, Munich and Cologne, Frankfurt hosts a large airport, the third in Europe and the thirteenth in terms of global passenger traffic. It is very common to stop over in this city while travelling to other destinations and in fact, many of us are familiar with the airport (or with the fair pavilions), but just a few have been able to visit the city.

Located in the heart of Germany, Frankfurt is the financial hub of the country, as well as being the European financial centre (headquarters of the European central Bank) and one of the most important in the world. Renamed “Mainhattan” in a friendly way from the name of the river (Main) that crosses the city, it vaguely recalls New York as it is studded by banks and tall skyscrapers. The many offices with clean and elegant transparent windows made me imagine – and not just a little – a job in this city and, to say it all, the pleasant evening walks in the historic centre have confirmed that it would not be so bad. Leaving out the work aspect, in today’s post I would like to tell you more about this city, which is not only necktied managers and smart working, but also history, landscapes and, needless to say good food.

The historic centre, almost completely rebuilt after the great damage caused by the Second World War, is rich in churches and ancient structures. Here lies the Römerberg, the city hall square that encloses the old town (the medieval Altstadt) with its historic and traditional buildings. It used to host the city fairs and the celebrations for the crowning of the sovereigns, while today we can consider it as a good starting point for exploring the streets of the centre.

St. Paul’s Church, Paulskirche, is known for hosting the first German democratic parliament in 1948, while the Gothic-style cathedral, the Kaiserdom Sankt Bartholomäus, is one of the few ancient buildings not destroyed by bombs. Not far away is Goethe’s birthplace, the Goethe Haus, a small jewel rebuilt with the original furniture of the famous writer and, further north, the Zeil, the large pedestrian shopping boulevard, surrounded by towering skyscrapers. As in all major cities, even in Frankfurt it is possible to admire the city from above, climbing the Main Tower, a 200-meter high skyscraper with a panoramic terrace and adjoining restaurant for the most demanding.

If you are travelling with children, with the U-Bahn you can easily reach one of the world’s oldest zoos, with over 500 species of animals, or the Palmergarten, the botanical garden, a pleasant green space where you can regenerate exploring over 6,000 different botanicals. For museum lovers, however, the Städel, the museum of modern and contemporary art but also design and architecture, and the MMK, the modern art museum a few steps from the cathedral and the town hall square, are worth a visit. If the weather allows and you want to appreciate the wonders of the city from a different perspective, you can buy a ticket for a boat ride along the river Main, which runs through the city, giving it an indisputable charm. 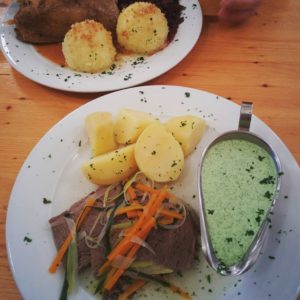 Country that you go, dishes that you find and you can not return from Frankfurt without having tried the grüne Soβe, or the green sauce. It is an accompaniment to many dishes and is used as if it were a mayonnaise, although much thinner. It is usually presented with hard-boiled eggs, potatoes or Frankfurter Schnitzel (our Milanese cutlet), but many restaurants offer it in a small bowl apart from other dishes, being a sort of joker that fits well with everything.

If, as happened to me, you will be delighted by the taste of green sauce, you can buy some packs at the Kleinmarkthalle, the characteristic covered market in the city centre where you can find many food souvenirs to take home. In addition to the grüne Soβe, the Frankfurter, the typical long and thin würstel and the Apfelwein, the apple wine from Frankfurt, considered for many years the traditional beverage of the financial capital of Germany, should not be forgotten.